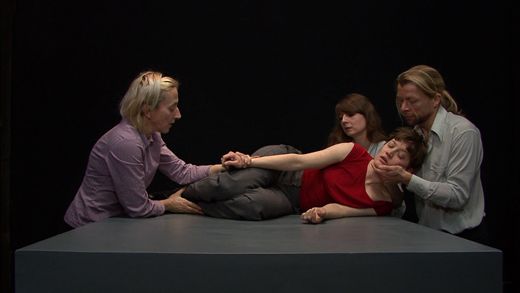 Opening Thursday, May 5 at 6 pm
Performance (Physical theatre) at 7 pm

Bettina Hoffmann’s work is located at the intersection of photography, sculpture, film, dance and theatre. She is choreographing movements of people in constructed spaces to facilitate the examination of the underlying mechanisms of social relations, conflicts and communication. Her work is developed and elaborated as performance as well as video installations while stressing the notions of representation through a mechanical eye.

For her exhibition at Occurrence, Hoffmann will be presenting five new video works that stem from these ideas. The first two, entitled Touch and Hold, are observing human relations. These video installations show people gathered in different settings falling, fainting, holding and pushing each other, creating a dance echoing disrupted communication and ignorance, as well as the conflict between reasoning and emotional and physical sensations. Other works will investigate the consequences and complications of suicide. The video Suicidewarp reflects on the experience of juvenile suicide. In the performance Freitod – Interference with happy memories, suicide is examined from diverse perspectives exploring reactions to suicide such as grief, ignorance, denial, feelings of guilt and the struggle of acceptance. Experimentally developed, this performance for 6 dancers merges elements of physical and grotesque theatre, contemporary dance and entwined multilingual speech. It will be transposed in the exhibition after the opening as a video installation. Finally, a fifth work called Jeu de paume is the video observation of a space from four different points of view. While the camera view changes regularly a strange game between several women unfolds.