Eve K. Tremblay’s multimedia project Becoming Fahrenheit 451 started in 2007. Similar to many of her other works, it was triggered by an accidental event from the artist’s former nomadic life and sharp observations of her close surroundings; in this particular case, the encounter with a video-rental store in Berlin, in the neighborhood Tremblay was living at the time. The store’s name, Filmgalerie 451, was indeed symbolic; it referred to the name of a famous Sci-Fi novel by Ray Bradbury (in the 1960s loosely adapted into film by François Truffaut) that describes not that distant future in which books and reading are treated as a threat to society’s peacefulness; as a disturbance that supposedly leads to uneasiness, doubt, criticality and consequently misfortune. Therefore, the books needed to be destroyed by specialized squads of firemen; only small groups of dissidents, the so- called “Book People,” had the mission to preserve the books from obsolescence in immaterial form- in their minds, through the specially developed photographic memorization method- in spite of being prosecuted.

The event of running across this store in Berlin generated remembrance of Bradbury’s book that Tremblay indeed read a long time ago. This became a starting point for several years of the artist’s immersion into contemplative, playful as much as persistent quest of memorizing Fahrenheit 451, in a metaphorical attempt of “becoming a book.” It engaged the artist’s interests in literature, theater, philosophy and visual arts as much as scientific texts, neuroscience, history of mnemonic systems and mechanisms of remembering and forgetting. Here, poetical approach and philosophical contemplation come into play with constant material experimentations; the still evolving project comprises of numerous media such as performance, video, drawing, collage, sculpture, installation, text, ceramics as well as Tremblay’s most common medium of photography.

For MK Gallery, Tremblay envisioned an all-encompassing presentation of her Becoming Fahrenheit 451, titled EKTBF451/EKTFF45 : Notes and Confessions. The exhibition starts with a letter, written and rewritten many times, to the writer Ray Bradbury himself. The letter is an invite for Bradbury to her exhibition, but also reveals, in almost diaristic form, the artist’s thoughts on the whole process of developing this project (as much as her reflections on art making in general) which she defines as “making and comprehending with grey matter” – both by her and by the public. The notes to Bradbury, as much as to herself, are also scattered throughout the exhibition in the form of post-it notes, creating peculiar and engaging juxtapositions of these short texts and imagery that surrounds them. These constellations feature Tremblay’s black and white and colored photographs and videos that had captured numerous days and months of memorizing the book (quite contrary to the fictional fast memorizing method of the “Book People” in Fahrenheit 451) and observing what was simultaneously happening in the artist’s mind, in private interiors of Tremblay’s ever changing apartment(s), but also in various locations during her travels. The images of numerous locales resonate the very process the artist chose for memorization of different parts of the book- by associating them with different locations and architectures from her past (the “memory palaces”.) One particular group of videos and photographs records the people from Tremblay’s surroundings; acquaintances, friends, and colleagues were asked to read and memorize parts of their own favorite books, in almost dreamlike compositions. The artist’s camera captured those people while being immersed in reading, or performing different, sometimes even odd things with their favorite books. The photographs- interiors or scenic natural historical and industrial landscapes (some of them more directly suggesting particular episodes from Bradbury’s book)- not only depict the individuals in action; in them, the books- a recurring motif in all of the compositions- become characters themselves as being brought to life by some supernatural force.

There are also some drawings in the exhibition, including Judo drawings that humorously adduce ongoing struggle with memory slippages (or maybe struggle with the years long project that cannot that easily be erased from the artist’s mind, in order to renew itself and develop new stores and focuses) as well as the compositions of empty memory cards (metaphors for forgetting), made through the physical act of destroying and erasing- traces of colorful and vivid memory cards which served in the process of remembering Fahrenheit 451, with images of backyards (again, particular loci) Eve was walking by on a daily basis while living in Bushwick quarter of Brooklyn, NY. In the exhibition, the original memory cards are also presented, as well as the copy of Fahrenheit 451- the artist’s companion since 2007 (purchased by the artist in Mauer Park Floh Markt in Berlin as the already used book) with numerous lines, notes and marks made in different colors by the artist (to facilitate the memorization). These layers upon layers of time and gestures are magnified and underscored in photographic close ups of the book’s used pages, onto which the artists furthermore added remarks and scripts in the gallery space. Throughout the gallery, one can also find staged assemblies Tremblay’s “clay plays”- ceramic pieces of organic shapes with photographs and figures imprinted on them. Ceramics has indeed been fascinating material for this artist in most recent months, because of the specific properties of a clay, which is, in Tremblay’s words, “material with good memory capacities”, but also because of the relation to the artist’s personal memories of her earliest engagement with art making in the studio of her father, an acclaimed ceramicist and sculptor. As an overview of the years- long project, the exhibition at MK Gallery also present documentation of previous exhibition iterations- in some of the images, there are performances of the artist in various exhibition spaces, memorizing or uttering the book lines in deep concentration, surrounded by curious visitors.

The multilayered EKTBF451/EKTFF45 : Notes and Confessions envelops an homage to the particular writer and generations of thinkers and readers influenced by his book. All of the displayed material traces referring to stirring, fabrication, preservation and failure of memories, as much as the memories’ potentials of reinvention and looking towards the future, interplay with the concern with the faculty of the medium of book, as much as reading and contemplation in today’s fast paced, inadvertent culture. 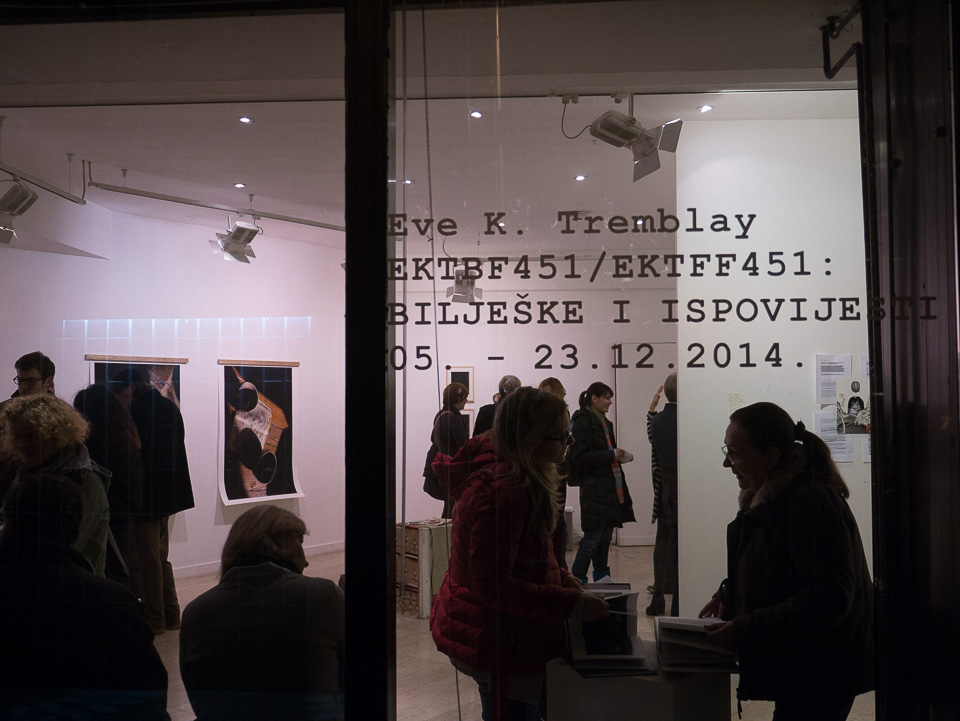 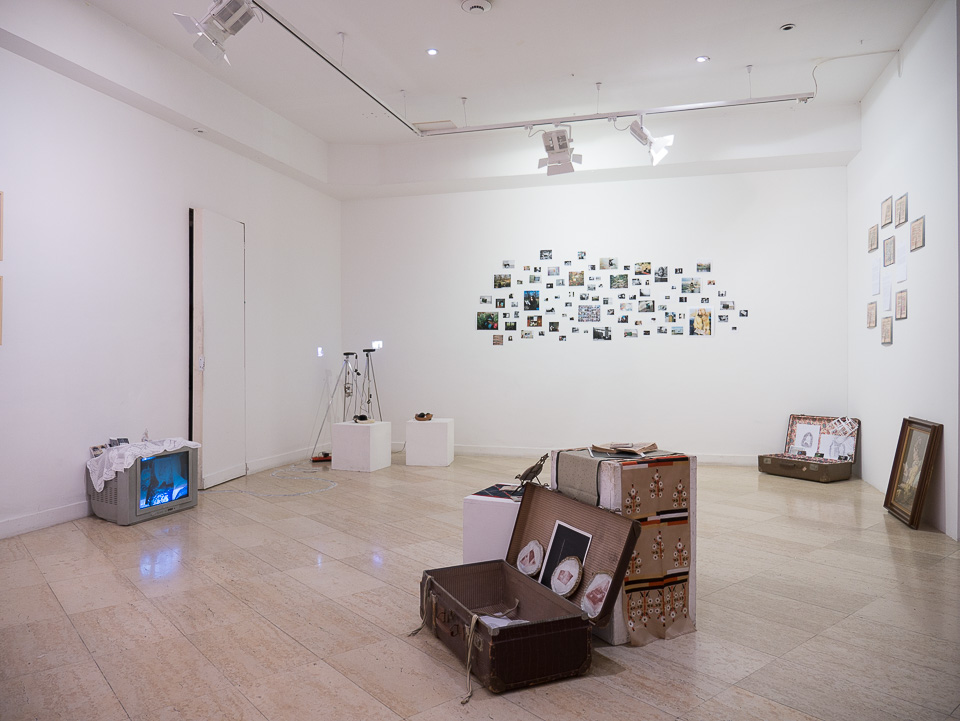 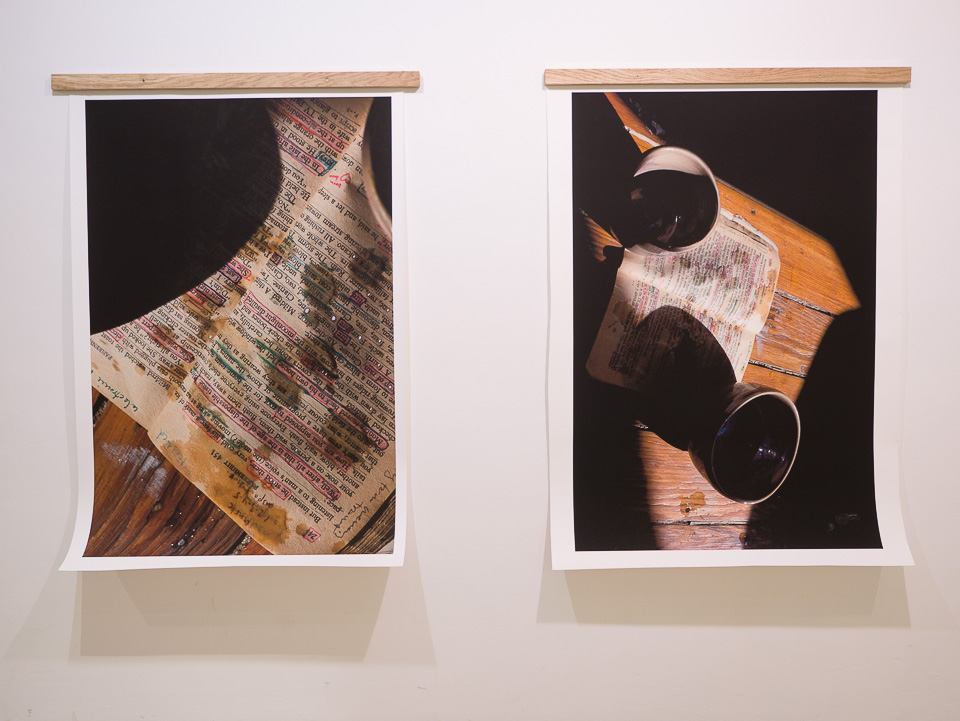 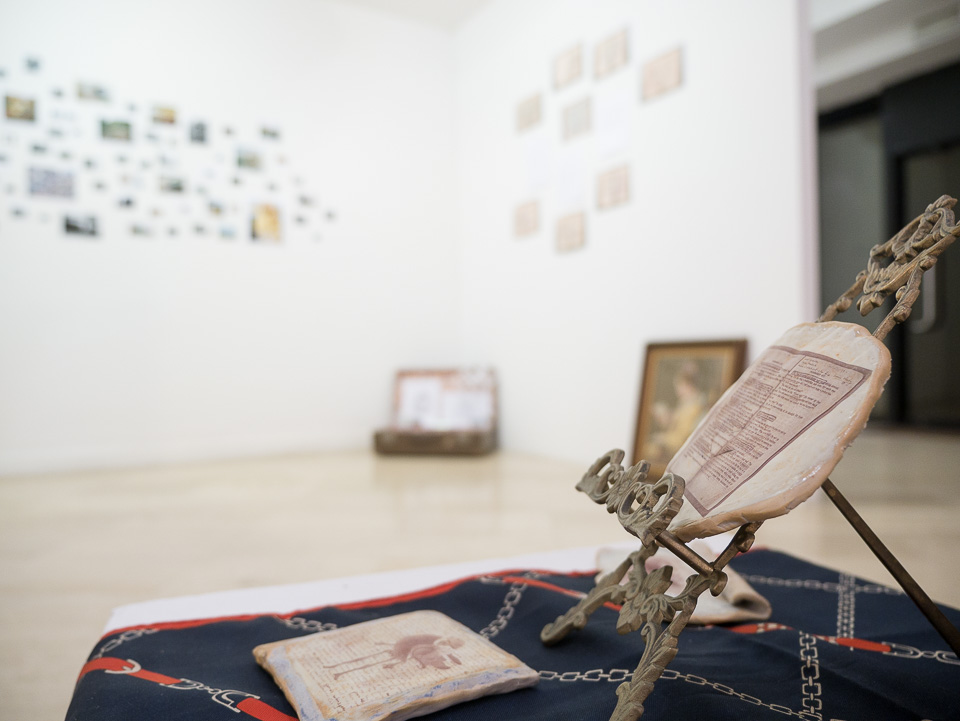 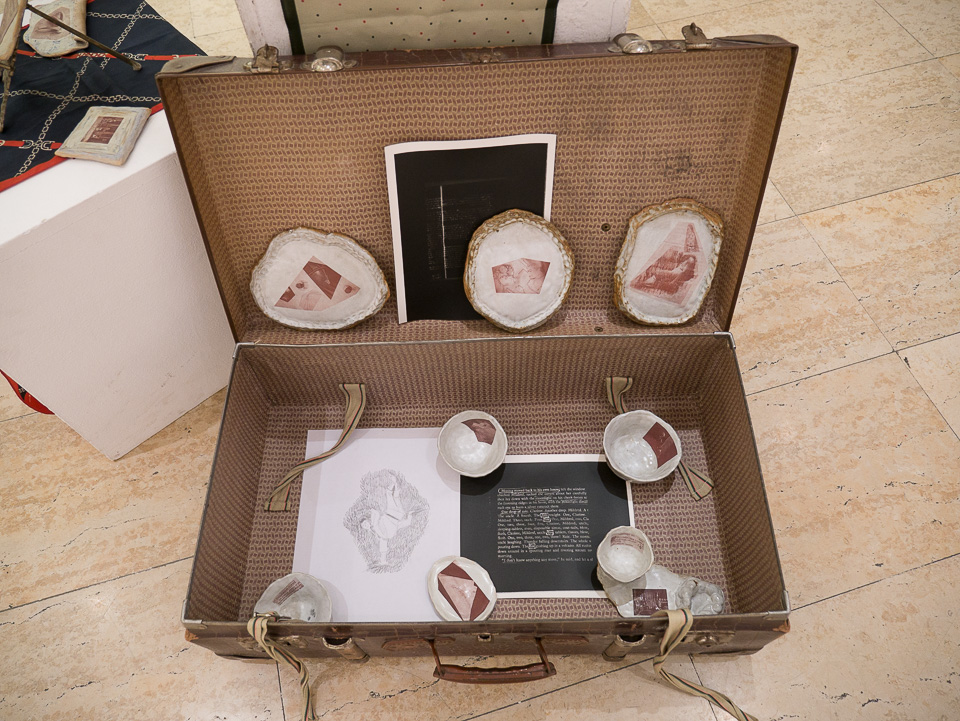 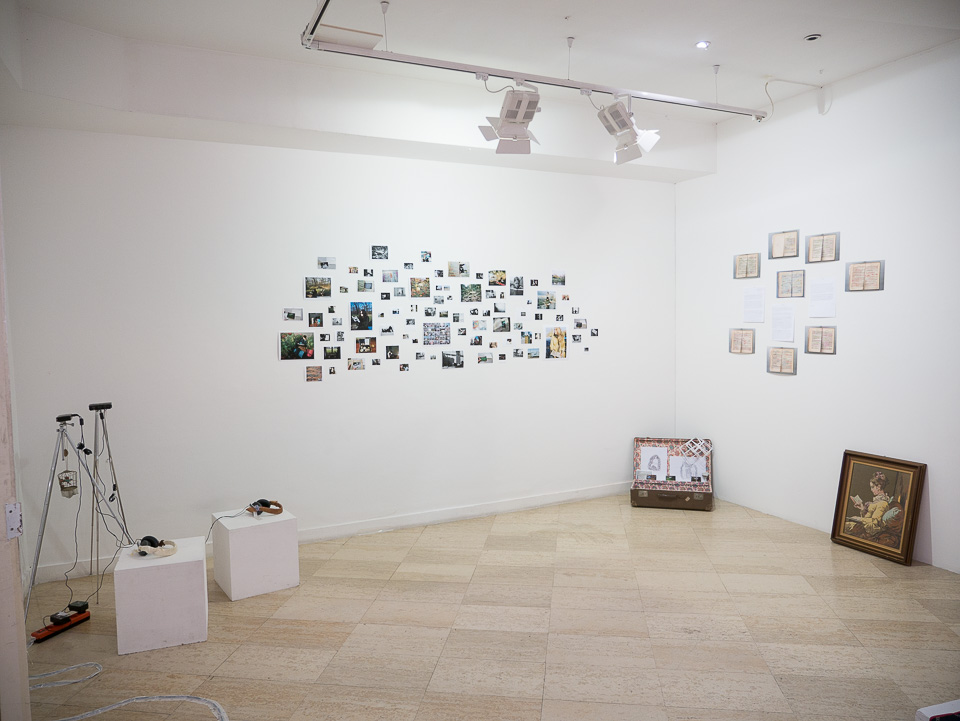 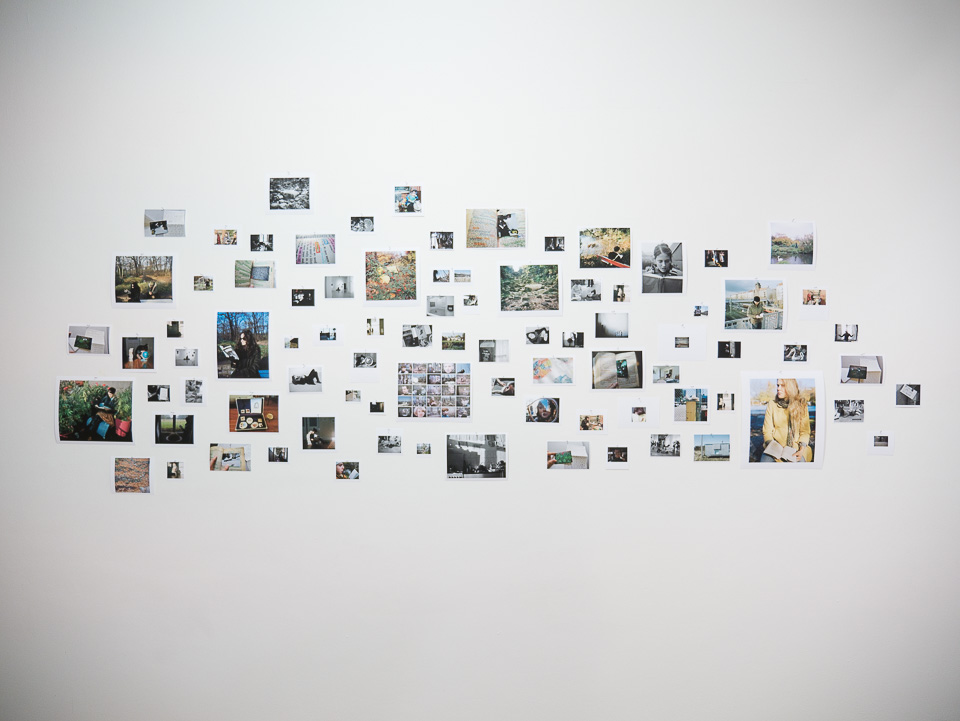 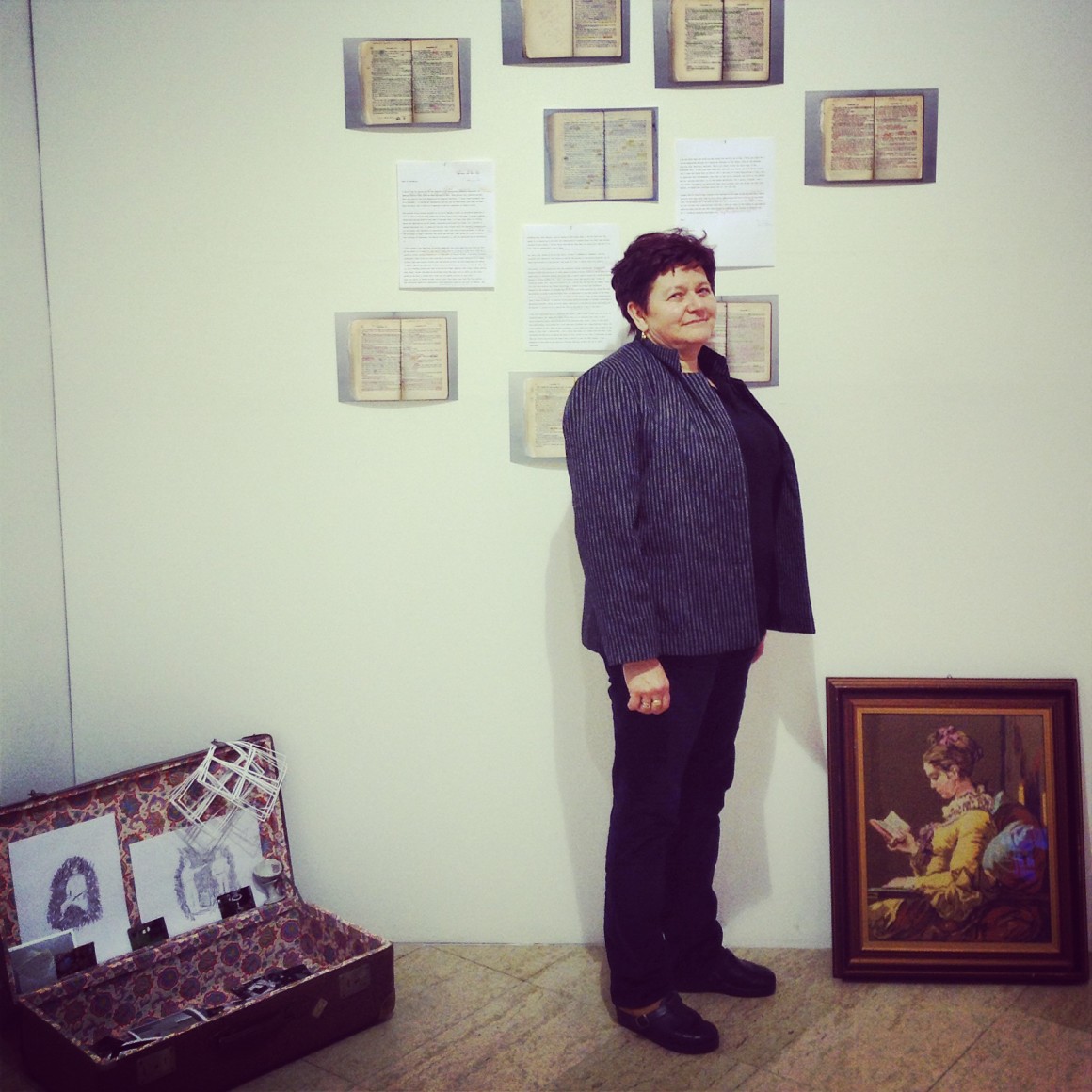